Retailers have had a sense of urgency before but, knowing what we know now, I think it’s clear that what was once ‘urgency’ was actually pretty relaxed.

It was an attitude of ‘we’ll get there eventually’, knowing that the transformation projects on the horizon would take months to come to fruition and knowing there were ten other things to solve before any larger projects could be started.
Don’t get me wrong, I’m definitely not suggesting there was an undertone of procrastination or laziness – in fact, I’m saying the opposite.
These are massive changes that, in the world of competing retail projects, were too complicated to pick up and solve in isolation of everything else.

But, almost overnight, the future arrived on our doorstep.
And it brought with it a sense of urgency that we didn’t know existed and a realisation that ‘in the next 12 months’ wouldn’t be an acceptable timeframe now.

Retail has been thrown upside down – the things we were busy with don’t really matter as much anymore, and our priorities have changed. The industry has had transformation forced upon it.

There have been retailer casualties – and there will probably be more. But what we’ve seen rise from the ashes is an inspiring show of retail versatility and adaptability. Retailers have implemented massive changes, at lightening speed, or have made decisions at a pace that would’ve previously been impossible.

There’s been a dramatic change in customer delivery expectations, and we’ve seen some extremely impressive reactions to that. We’ve built an entirely new way of serving customers, and we’re seeing the finest hour of final mile.

I’ve done a quick round up of a few of the reactive retailers who are doing things now that they weren’t 2 months ago.

I really liked Gymshark’s Twitter response to the lockdown. Their temporary name change was a great way to grab the chance of strong brand kudos and positive PR – whilst, obviously, being responsible and backing an important message.

SCHUH AND LUSH, PAUSING IN ORDER TO COME BACK STRONGER

After one of their busiest weeks so far this year, Lush (one of our clients) made the decision to shut up shop and clear the decks. When all existing orders are complete, they’re using the downtime to work on exciting new products and projects. Schuh has now reopened their warehouses with a phased approach, after making a similar move. They’ve been working to ensure they have a number of strict social distancing measures in place in order to keep staff safe. The way these retailers have responded to the changing situation by making quick decisions is testament to their agility.

I won’t write for too long about supermarkets and grocers, because I’m in awe of their response and would probably go for pages and pages. We owe a lot to those going to work every day to feed the nation. But can you imagine being told in December 2019 that your Tesco delivery might arrive in an Asda van?

The complete pivot of partnership, and the relaxing of competition laws, has been a historical moment for the industry. The sharp increase in delivery slots, the collaboration with DEFRA and the front line key workers doing extended hours are all examples of the way these brands have changed, and continue to change, as the situation develops. 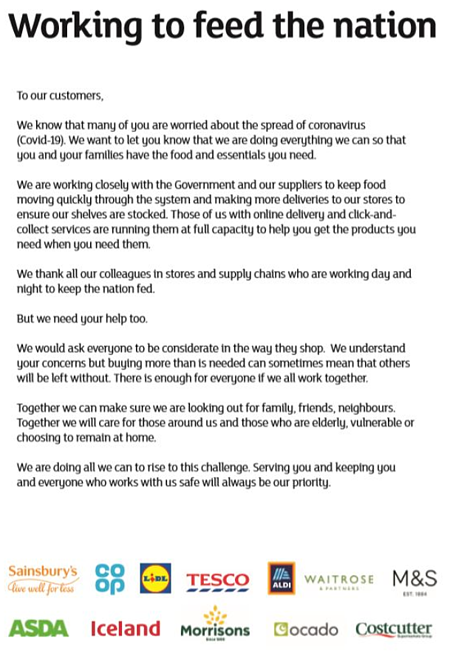 Staying on groceries, but thinking more about logistics, I was very impressed to read about Sainsbury’s using local stores for hyper-local fulfilment. A move in the direction of on-demand top-up shops. When retailers have store estates lying dormant, I predict we’re likely to see a lot more of this in the coming weeks.

One of the UK’s largest retailers (who we can’t name yet, unfortunately) has just expedited the sign-off of a partnership with us to launch a game-changing ship-from-store offering – similar to how we work with Farfetch. I think this is an example of how it’s not just about short-term quick fixes, but also about changes with longevity that will future-proof the business too.

Suddenly, with little warning, retail looked as if it were this dystopian future that the critics and commentators had warned us about; fewer shoppers, no high street and less carefree spending. But as consumers spoke with their mouse clicks, the way the retail industry responded has been impressive. The enablers through this will be agility and collaboration – working with competitors, expert third-parties or seeking consultation to get support and act quickly.

Although tough days are still ahead, we’re seeing lots of retailers pave the way for the new normal of retail. Whatever that might be…

Back to Blog home